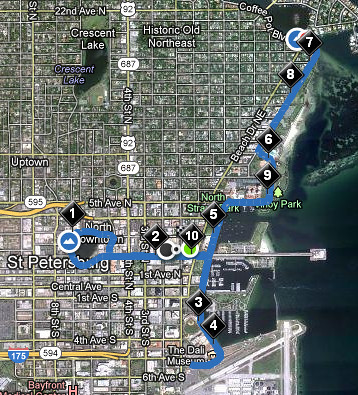 The Suncoast Classic was my first 10k race. I had run the distance before on my own, the quickest I had covered the distance was 55 minutes. Since the Run With the Nuns 5k, my arthritis had ramped-up, and was getting me depressed. Never had my knees felt so bad for so long.
My sister suggested I try a product called Osteo Biflex (an over the counter supplement). By itself, I didn’t get much relief, but in the last week I also started taking a couple Advils each day. The Thursday before the Suncoast Classic I ran 5 kilometers, and felt really good afterwards.
The Suncoast Classic start/finish line is centered at Baywalk in St Petersburg. Parking at the Baywalk parking garage was a breeze.
The 10k starts 15 minutes before the 5k race which is done to eliminate logjams at the start. In my case, I was going to be finishing the 10k when a lot of the 5k runners were finishing their race. The 10k race is a three pronged route, a beginning western leg that heads out around Mirror Lake, then comes back through Baywalk, the next leg heads south towards Albert Whitted Airfield comes back on itself for the northern leg. The northern leg avoids the Pier (thank God), past the Vinoy and up to Coffee Pot to where it doubles back on itself. My race went well till the 7th kilometer northern most turn-around point, that was where my soul wanted to quit. I was suffering from time standing still/will this race ever end neurosis. Once I got back to the Vinoy my mood had lifted. A few of the people who I had been pacing behind suddenly dropped off in performance, and this woke me up a bit and I was able to clean up my stride.
There was one final water point and the volunteers did a great job yelling out to everybody that the finish was just around the corner and was within sight once we made that turn.
Now this where things turned into Twilight Zone moment. The 10k group I was pacing with was really three or four people spread out across 100 yards. Somehow at the final turn the 5k people were joining the final leg of the route. So suddenly I realize I have all these shadows of people around me all making their final kick for the finish line. I didn’t think I had any strength left and just wanted to gallop to the finish, but all these people snapped me out of that funk, and I immediately got on my toes, opened my stride way up, and kicked for the finish line. The shadows that had appeared drifted backwards, felt I had made a gap so I backed off, suddenly again I hear the same people yelling to each other and the shadows came back from behind me. Gahhhh, I was going to have to sprint the whole way to the finish!
I had a real strong finish, set a new personal best for 10k of 51:14, finished 123rd out of 464 finishers. A good race for me, I liked the course a lot, nice & smooth, it avoided the Pier (the long Pier straightaway is a soul crusher for me), and there were plenty of water stations along the route.
http://www.racesmith.com/results/2012results/SuncoastClassic10K022512ag.html

Suncoast Classic Run for Kids, a set on Flickr. 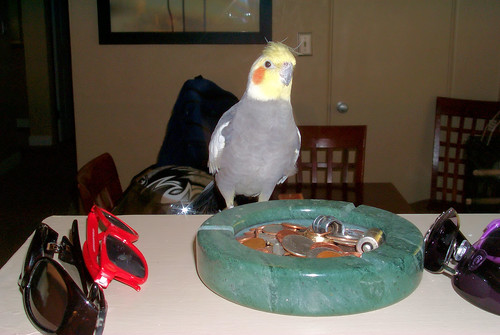 For those that know me, they know that I had a bird named Beep. For most folks (me included) birds are those flying things that don’t let you get close, and if they did the result would either be pecking, poop, or a flurry of feathers.
Back in 1991, I was sharing an apartment with a woman that a few years later would become my wife. Lisa worked a late 2nd shift, and I worked 3rd shift. So when I would come home in the mornings, she would be asleep. On one morning I came back to the apartment, and noticed there was a loud bird in the tree in front of our place. When I went to investigate I saw that it was a cockatiel. I recognized the type of bird from pet stores, and thought, I should try to retrieve him.
I tried to climb the tree, but it was too high. I tried (this is dumb) to get a stick, thinking I could just knock him out of the tree, but he proceeded to climb just a little further out of reach. So I gave up, and went into the apartment.
My future wife was sleeping, but I went into the bedroom to let her know I was home, and that there was a loud bird out front. Too tired, she rolled over and ignored me.
I stayed up for a short while, watching TV, and soon she woke up and was asking me what the noise was outside, and I told her again about the bird.
She went outside to investigate, found that he was too high in the tree, so she climbed the stairs to the 2nd floor of the complex. Once there she called to him, and he promptly he flew over to her. He had adopted us.
We never had a bird before, and didn’t know what to do with him. So the next day we gave the bird to my future wife’s parents, and they were going to adopt him. Over the course of the next day or two we realized that he was kind of cute, but her parents had a terrible track record when it came to the care of birds.We wanted him back.
So the future wife brought him back, and we never let him go again. And he never let us go.
We bought a cage, and kept him in it.
When it came to picking a name, we tossed around a few ideas, all since long forgotten. I had remembered reading a book about Led Zeppelin (Hammer of the Gods?), and one of the Led Zep staff members was a man named B.P. Fallon that went by the name “Beep.” Without giving any background, I suggested the name, and it stuck.
Beep would call-out if the room was empty during daylight hours – which is kind of a bummer if you work nights & sleep days. In order for us to get rest, we moved his cage into the bedroom with us.
It worked. As long as he was able to keep an eye on the future wife, he would be calm & quiet.
Without realizing at the time Beep had made us a family.
(to be continued)