Around five or six agos, I realized that I was having greater & greater difficulty doing squats in the gym. I knew I was getting old (forties), so I figured there would be a loss of strength, but the knee pain was something I wasn’t expecting.

I checked my ego and switched from doing weight resistance training with my legs, to doing cardio. Mainly Stairmaster, but also the elliptical, and treadmill.

That night my knee began to swell, and for the next few days it had a little pain. Nothing severe. After a few days I was back to my routine, only now the Stairmaster was inpossible to use. The pain in that knee was terrible. The pain was okay on the Elliptical, but unnerving on the treadmill. Okay, minor setback, do the Elliptical till the knee heals. I was going to be entering my first 5k, and street runs had me running so that I favored one leg over the other. I saw a massage therapist at the gym, and she suggested that I might want to get my meniscus checked. And that began the process of doctor visits.

Once I made it to the orthopedist, and she did the scans, I learned that I had arthritis (guess I could have started this post right there). Her advice, stop running, no treadmill, no stairmaster, go swimming or get a bicycle. I was falling apart. I went from doing squats, to not being able to do anything, in just a few months!

Soon my weight & blood pressure went up, and now I was diagnosed as pre-diabetic. I had no choice, I was going to have to run, or walk long distances, so that is what I did. As you can see from my posts, I entered races, I ran, and the pain increased. I finally scheduled an appointment with a different orthopedist, a sports orthopedist.

The new orthopedist took x-rays, and told me that my knees weren’t that bad. The knee caps were most definitely an issue, but he could help. He ordered a series of Supartz shots (still waiting on insurance approval), and he gave me a shot of cortisone in each knee. He told me that the shot of cortisone was to give me prompt relief.

That night my knees hurt even more from the shots, the next day they felt a little better and my daughter and I went for an easy 5km run. Not as much pain during the run, and none the next morning. Very promising. Came home work and ran a faster 5kms by myself, there was a little pain, but nowhere near the amount I was use to. Stoked!

Over the course of the next few weeks I should be getting the Supartz shots, so hopefully that adds relief just like the cortisone shots. Kicking myself for waiting so long just to get a second opinion. A second opinion from a doctor that was looking to keep me active. 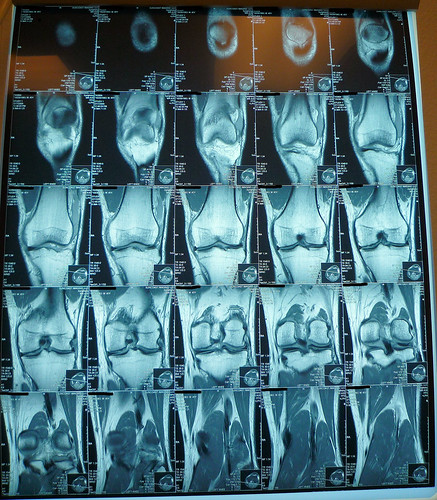