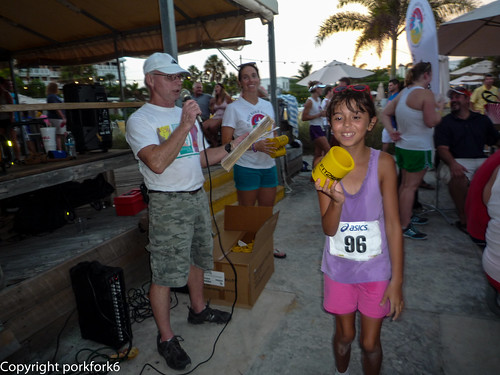 In the first race of the series, the beach was scrubbed flat & hard by Tropical Storm Debby, this time wave action had the beach uneven in parts. The biggest factor was the heat. The Sun had blazed down on the sand all day with no cloud cover to take the edge off. Within the first kilometer, my daughter was asking for a walk break & wondering when we were getting to the water station. Not a good sign. There’s no reason to push so hard that it makes running miserable, so we probably took five walk breaks & two water breaks.

Running in sand is hard, add the 90 degree heat, also add the monotony of running a straight long stretch – brutal. We ended up adding an additional 3 minutes to our previous beach race, but my daughter won her age group and an another SPRR coolie cup! So very very proud of her. She endured a very tough race.
Managed to get a few in-race photos of folks. I’ve noticed a group of women that run wearing the same color scheme outfits at previous races, and got a few pics of them, as well as other folks that I’ve seen at these same events. One gentleman I share discussions with about the Steelers is in a picture. It’s great how folks root for my daughter during the race, and congratulate her afterwards. She gets a big kick when they announce her name during the awards ceremony. (have I mentioned how proud of her I am?)  Oh yeah, I even have people that recognize me from my Homer Simpson t-shirt. I’ve worn it to a lot of races, and now people recognize the shirt and me. So that’s kind of funny. Having a great summer. 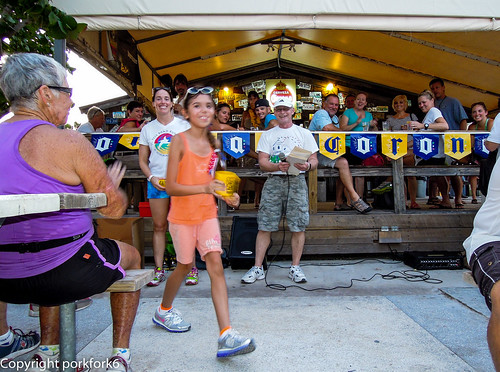 This year the SPRR (St Pete Road Runners) beach races are being held at the Postcard Inn on St Pete Beach.

The week previous to the race Tropical Storm Debby came through. Beaches to the north and south of St Pete Beach had suffered a lot of erosion, so there was concern that there wouldn’t be enough beach to run on. The reality was that the beach was hard-packed, the wind was calm, and the temperatures were in the low to mid 80’s. Excellent running conditions!

This was my nine year old’s first beach race, and she did a great job. With the sound of the horn we were off to the races and heading south towards the Don Cesar. The course volunteers did a great job at the waterpoint, with enthusiastic cheers for my daughter. Every once in a while we would slow to a 30 second walking pace to catch our breath. Before we knew it, the race was done. Not our fastest race at 35:30, but later discovered that my daughter was suffering from a cold, and had chose not to mention it to us. Being the only 9 year old girl in the race, she easily won her age group! And a SPRR coolie cup was her award! She had her name called out at the awards ceremony, and she loved it. (of course being a proud father, I loved it too!)

I think our time will improve when she is running healthy, all things considered she did a terrific job in less than ideal health.

Big thanks to the race volunteers, the SPRR, AND the Postcard Inn.

Picture gallery (same as above but on porkfork)