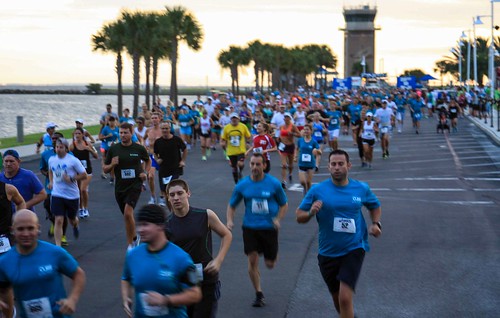 First off, The Celma Mastry Ovarian Cancer Foundation is a great cause. Like last year the start/finish line was located along Dan Wheldon Way at the Albert Whitted Airport in Saint Petersburg Florida. The organizers and police do a terrific job of getting the course set up, and blocking off car traffic. With that city coordination came with what appeared to be a last minute pre-race speech by the Mayor of St Petersburg Bill Foster. There was also an announcement to have the runners enter the box first, then the walkers/strollers next. By the time the race started (14 minutes after the  scheduled time), the walkers had infiltrated deep forward in the box and log-jammed the start.

I’m trying to get use to this phenomenon, but it’s still a bummer to spend a minute walking 20 feet. After that I had to hop onto the sidewalk to run, since to run through the walkers would have been maze-like. To make up this perceived slow release I ran my first kilometer at a pace I wasn’t comfortable with, and I think it impacted the rest of my race. Totally my fault, I need to remember that these are also known as “fun runs.”

Fun stuff: I found myself in a couple running duels with people. the first was a woman who had a decent pace, but her pace collapsed at the 2 kilometer mark. But another gentleman came up and passed me, then proceeded to move right in front of my path and slowed down. Not a big deal, since by this point the amount of people in our local group was small. I moved out and around and continued at my pace. I figured I would pace with this guy, then sprint past him at the very end. Around the 4 kilometer mark, his pace dropped-off and I continued on. I didn’t look back, so I kept imagining to myself that he was still right behind me, and I needed to deal with him at the end. In the last 400 meters of the race I had gotten closer to another pod of runners and decided they needed to be my competitors. Which is a tricky mind game to play because people usually pick up their pace once they see the finish line, and then they run away from you. This time though, I managed to have a very nice finishing kick (well for me it’s a “kick”), and passed a maybe 6-8 people just in the last 200 meters! Very nice!

Not sure what race to enter next. The Komen is in a couple weeks, but that draws so many people, that car parking becomes an issue. The Creaky Bones is a decent 5k, but I just can’t bring myself to run a circle around the Pier to start the race. The Creaky Bones website makes no mention of the course layout, so I have to suppose they are keeping that Pier lap. Bummer. Which may make my next 5k The Purple Stride.