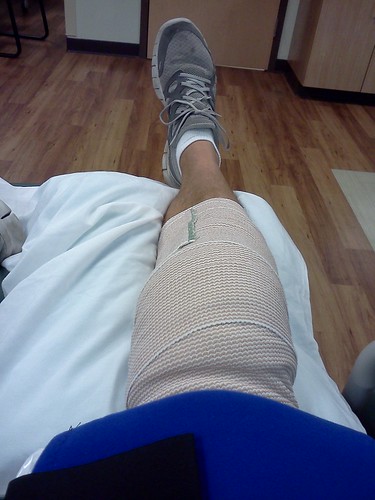 The orthopedist cleaned up the meniscus, removed the floating debris, and found that the bone was damaged. My running days are over.

My Doctor has Stuck a Fork in My Running

As I have talked about in previous posts, I have arthritis in my knees. I see a sports orthopedist that handles professional ball clubs, so I have to trust his word. I had been getting periodic cortisone and Supartz injections. Both have been Godsends!

Supartz I come to think of as joint lube. The cortisone is immediate relief, the Supartz seems to take the clunky, course action within the joint.

With those injections, and doing self-administered stretching & strength therapy, I was able to increase the length of my runs.  Eventually being able to run a half-marathon race. (I also got to run half marathon distances three times on my own.) Unfortunately recent MRIs revealed a lot of damage to my right knee, and the running was destructive. The doctor said he could keep me comfortable with injections, but the amount of damage could only be helped with a knee replacement. Or stop running.

I don’t know what other people experience when they run, but when I run any distance over 8 kilometers, the pain that I experience goes away. Which is nice. But for me the best part is mental. There is some sort of zone I would get into. Very peaceful. No pain, no thoughts, no worries, nothing. Totally checked-out mentally. I imagine it is something like meditation. I would snap out of this zone to realize I was nowhere near where I had my last conscious memory. Snapping out of that zone to a new song playing on my ipod, but no recollection as to what the last song was. A terrific feeling.

But it’s not like having that experience once during a run is enough, so running farther & farther was wonderful. It is the lost moments that I will miss the most, but I am thankful that I got to experience.

It’s been a nice run. 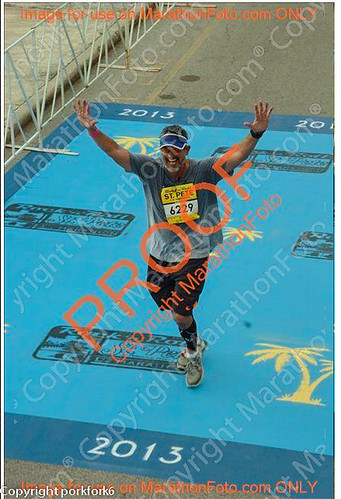 Growing old and picking up running has been a challenge. One physical challenge after another. Arthritis in my knees, calf tightening, blisters, chafing, purple toe nails… Going to a good orthopedist brought me a lot of pain relief, and with it the ability to run greater distances. Hence my entry to the St Pete Rock ‘n’ Roll Half Marathon.

Back in November I had run 13.1 miles on my own, twice! Immediately after the second run I got a nasty cold, and had to suspend running for a few weeks. Combo that with the holidays, and more knee injections, and I had lost a lot of training time and stamina. The R’nR was now approaching fast and I was afraid that I had missed my training window. Then the last problem. Norovirus. For three weeks, the norovirus roared thru work. I would overcome it on the weekends, but by Wednesday of the next week, it would be back again. The only way to feel better was to swig Pepto Bismal, and only eat a couple crackers at work. I did manage to run 13.1 miles in my neighborhood the Saturday before the race, so I still felt confident going into the R’nR.

The R’nR held their packet pick-up and running expo at the Trop, which was really very nice! Usually I wear a pair of headphones to listen to my ipod, but Snuggbuds had a booth set up, and I was able to test a pair of earbuds to see if they would stay in my ears. I ended up buying a pair, and they are freaking awesome!

Sunday, race day, I left the house early in the morning and parked at the Trop. The weather was very nice, the start was organized, and we were off. Almost immediately negative messages infiltrated my mind. “Am I going too fast?” “God, I’m going to be doing THIS for another two hours!” “I wish this was already over.”…

The first five kilometers went by uneventful, it was nice to head back into downtown. The southbound leg was dreary, the streets were narrow, and there were parts where the street was crumbled, chopped, broken, and uneven. Probably not something that a healthy runner noticed, but with my knees I have to carefully measure foot drop. Once we got to the southernmost point and began our trip north, more negative messages. “Ahh, I still have to go up to Coffeepot!” “Not the Pier, please God not the Pier!” (The Pier is deceptively long, and 100% boring) At this point, my eyes never lifted from the ground. I had entered into the zone.

I have no recollection of running behind the Pier, I remember getting to the end of the Pier road and making the turn back north, and immediately began a 30 second brisk walk. There was roughly 5 kilometers, (3 miles) left to the half-marathon and my reserves were depleted. My pace the first 10 miles had me finishing in about 2:05-2:10. I was so rundown, that I finished in 2:19.

Not the time I wanted, but I finished. My knee was swollen, and I could barely put any weight on that leg. Crossing the finish, putting my hands up, collecting the medal, well that was fantastic.

The greatest moment though, was all the time that I couldn’t account for. The peace that my mind finds when I’m out on a longer distance run. Out of the almost 2.5 hours, I can really only account for about 35 minutes of it. Of all things I’ll miss about running, it will be those peaceful gaps. I have no idea if anybody else experiences those, or if it is peculiar to me.

Damn, I hate getting old. 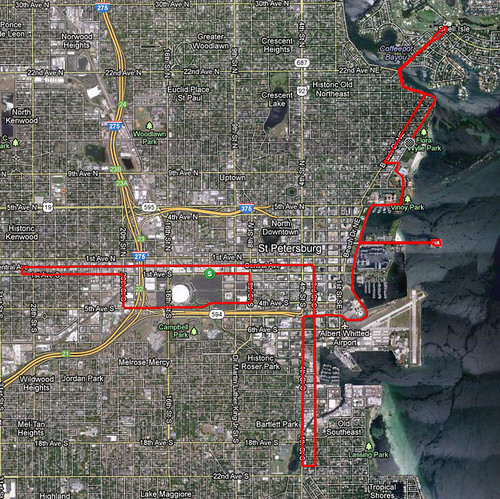