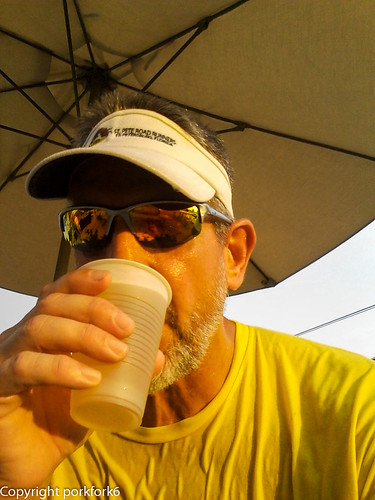 Quick recap, at the end of May I had part of my kidney removed because of cancer. It’s been a long (ongoing) recovery from surgery.
Looking for a recap of Race 2 of the series? It’s not going to happen, I forgot to go. Derp.
Race 1 was a violent weather super-soaker, but race 3 was great! Sure the humidity pushed the heat index up to 98, but it’s summer in Florida, and that’s how it is.
Ran into somebody from Pennsylvania that was going to try and run the 5k while carrying a DSLR camera, and it’s tote bag! There is simply no way that actually happened. I ran a couple races with my daughter while carrying a point-n-shoot camera, and that wasn’t a problem, but a full blown camera! Oof!
I started from the rear, and proceeded nicely through the field. The path on the beach was wide and the sand was firm, so it really was great conditions. It was nice to run with a group of people, it just somehow gets me to push myself a little harder. After a couple kilometers I realized that I had fallen into a pace with a guy just a few yards in front of me. He works at a running shoe store, and is quite a few years older than me, but he had a good pace.
[AFG_gallery id=’4′]
Once we reached the turnaround point he got a few steps farther ahead of me. I begin looking at the distance on my garmin, wondering if I could hold onto his pace, should I back off, should I take a walk break? I ignored that internal voice. A guy in a dark shirt passed both of us. At around the 3.5 point, the guy I was pacing behind slowed. I maintained my pace, and ever so slowly passed him.
Not for long, next thing I know he was right on my shoulder, then two people passed us, then he went ahead. It was too early for me to pick up my pace, and I knew it. If I stepped on the gas, I would have to take a walk break within sight of the finish line. No bueno. Save it for the last 100 meters.
Somebody right behind me had a guy rooting him on, “DON’T LET THEM BEAT YOU! PASS THEM! YOU’RE FASTER!” It was like I was a horse being hit with a riding crop. Off I went, and there was still 300-400 meters left. There was no way I was going to let anybody pass me, but with about 100 meters left, I was gassed. But that’s when there are folks at the finish line cheering people on, and that kept me motivated. Passed the guy with a dark shirt, that had passed me at the turnaround.
I’m not fast folks, but I do enjoy running. Now we move onto the winter racing season.

I Hate My Calves Soooo Much

Well my mileage is coming back

Well my mileage is coming back. You can see the dip that occurred after surgery