Where to start? It was a multi-length event with a 10k, 5k, and one miler. For the last year+ I’ve been running with a group, and joined the 10k with them.

Many of the races in St Pete take place downtown, with a route that runs past the bay. Not only is it scenic, but the police only end up blocking traffic from one side. In the weeks prior I began to add more runs for longer distance (5 & 6 miles). One week before, I go for a run at the scheduled start time of the race to gauge what the conditions would be like. Oof, 90% humidity and the heat spiked. Doubts began to creep in on whether I even wanted to run this thing.

Monday’s group run went fine, Wednesday was speed training – which led to some dead-legged feelings all of Thursday & Friday.

Spent Friday with more internal voices of doubt. I just didn’t think I was going to be able to turn in a decent effort. Couple that with the fact that I was running it with friends from the group, and now there would be witnesses to my failure. WTF, where is my brain getting this shit?

Saturday, get up early enough, get downtown, finally find event parking and follow the herd to the startline. Yay, there were my friends! Good times. Every couple minutes a voice over the PA would give updates. Soon we entered the start box, enjoyed the Star Spangled Banner, but again another race where the start was awkward. Just an out-of-the blue horn going off. And we’re off.

My friends quickly disappeared, I would catch a glimpse of them, but I could see I was not on pace, which was okay. I didn’t want to DNF, I knew my pace was good for me, so I cruised along. The race was great, the course is scenic and flat. I came across one woman that appeared to be running the course via intervals. It took me by surprise when she zipped passed me, then a minute later she was walking. I continue trundling along and pass her as she’s walking. Zip, there she goes again. This time though when I got passed her, I never saw her again. Another woman woke me from my slumber, when she came up along side me huffing, puffing, and groaning very loud. We were probably, maybe 2-3 kilometers into the race, and she was in bad shape. And trying very very hard to keep my pace. For those new here, I’m in my early 50’s, arthritic knees, former smoker, and had kidney cancer a couple years ago. I was fresh as a daisy compared to this woman. Folks, watching highlights of the Boston Marathon doesn’t turn you into a marathoner. Hope she was all right.

As I got closer to the turnaround, I began to see the gofast folks on the return leg. So I kept an eye out for my friends. As the first one went by I yelled her name, it came out louder than I expected. A minute later another friend was going by, but she wasn’t looking so I yelled her name – loudly. Had to get her attention. When the third one went by, I felt like I really needed to embarrass her, so I yelled out her name extra loud. They can just unfriend me later if it’s an issue (it’s not).

I really don’t remember the return leg. Just a few moments here & there. Ran into one of my friends again on a side leg, she told me she was losing speed, I said I was losing speed as well. That was with 2.5 km left. My mind began to send me warnings. On my training runs, there is a ramp at 2.5 km, and it sucks my wind from me. There was no ramp, but my mind kept telling me to prepare for it. Stupid brain. It was around that area that the 5k people joined the running herd. Many had a very brisk pace, and that kind of messes with the psyche. I begin to wonder, “how many of these people are 10k’ers?” From that 2.5 km point, the course meanders a little, it cuts back again at Dan Wheldon Way, then it goes back into downtown, but quickly turns again. I begin thinking that the finish line should be coming is sight, one more turn and there it was. It was still 300+ meters down the road, so I didn’t speed up a whole lot.

I had one guy in front of me, that wasn’t picking up pace, so I thought I would follow behind, I don’t think he was a 10k entrant, but he looked sluggish. Wake up brain! The finish line is right there! (well a couple hundred meters – striking distance) I hear a lot of yelling going on, it was my friends. All that loud yelling I had for them during the race, they gave back to me at the finish. That yelling got me to pour it on even more. Strong finish. 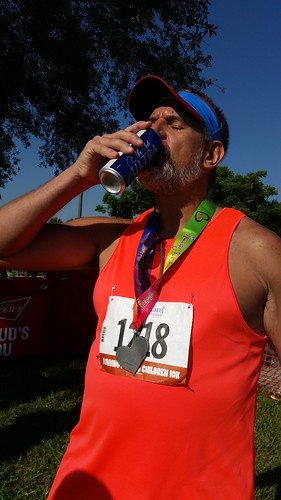